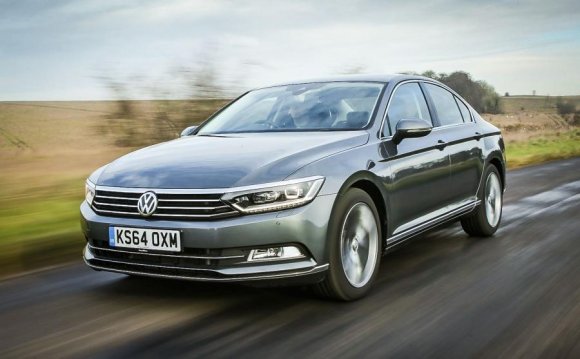 Our long-term 2014 Volkswagen Passat TSI was about a day away from ending its tenure in the fleet when I noticed it was nearly due for its 20, 000-mile service. It didn't seem right to return the car to VW with dirty oil. It's sort of like borrowing a suit from a friend and not having it dry cleaned. Our fleet admiral, Mike Schmidt, made a call to get our loan extended by a few days so we could take care of the maintenance.

Negotiations are ongoing in my home about a next-car for my wife and daughter, as they're both outgrowing a long-serving Honda Civic. The options have run the spectrum. I like the Honda minivan idea actually (last generation only), thinking it can serve a good second life as beach wagon after its useful service as mom-and-kid shuttle and road tripper. We haven't abandoned the idea, but it feels a little excessive.

It all has to do with the relative price of the two fuels involved: 87-octane regular unleaded and low-sulfur diesel.

This week the national average price of regular unleaded fell to $2.98 per gallon. Diesel, on the other hand, currently sits at .60 per gallon. But the Passat TDI enjoys a substantial rated fuel economy advantage of 34 mpg versus 28 mpg combined for our TSI gasoline model, and the extra efficiency boils down to a net TDI savings of...

The TDI version costs , 100 more, so the TDI payback period currently stands at a somewhat discouraging 210 years. Perhaps you prefer to think in terms of miles driven because you drive more than the assumed 15, 000 miles per year. Fair enough. At today's prices the TDI will start paying you back after a mere 3.16 million miles.

But the price relationship between gasoline and diesel is a stormy one, and one-size-fits-all national statistics don't mean much in the face of substantial regional price variations.

So here are a few more payback scenarios.

Who'd have thought our 2014 Volkswagen Passat TSI would reach its 12-month mileage target with 4 weeks to spare? I'm not sure I would have taken that bet last November, especially since we had already been driving an identical silver TDI diesel version when this gasoline one arrived.

Turns out the Passat has endeared itself by being a capable family runabout and a credible highway cruiser. And it can be quite efficient if you put your mind to it, as Mike Monticello showed us last month.

How did the 2014 Volkswagen Passat TSI perform during the National Highway Transportation Safety Administration's battery of crash tests?

After a fairly painless round of allergy testing, I learned that dust, and the dreaded dust mite, is my enemy.

"Get a new mattress, " the ENT doc said. "Buy all new pillows, bedding — change everything you can associated with your bed."

While I didn't try to stuff a new Cal King Tempurpedic into the trunk of our long-term 2014 Volkswagen Passat TSI, I did pick up a couple of king-size down-alternative pillows on my way home.

Styling is subjective, I know that. But still, I'm struck by how handsome our 2014 Volkswagen Passat TSI is. To my eyes, it embodies a clean, neatly-tailored design reminiscent of its upscale Audi cousins. No exaggerated swoops along the body sides, no bulging headlights, no discordant taillights.

Toward the end of my four-day Texas Road Trip in our long-term 2014 Volkswagen Passat TSI, I noticed the steering wheel was slightly off-center.

Arizona had gotten some rain the day before, and the sky was full of leftover clouds for a cool-looking sunrise. It also helped my mood that I found a much nicer backroad to run on near my hotel, kind of off in the country, than I had on my trip over in New Mexico. I'm telling you, I'm loving this early-morning run thing on road trips. Even if it means sacrificing 45 minutes or so of sleep.

I took a slightly different route home to California than I had to Texas.

Thanks to a road trip by Mike Monticello, our 2014 Volkswagen Passat TSI has a new best MPG, furthest range and a higher overall fuel economy average. Good work, Mike. It must've been thrilling.

How boring, I mean efficient, was he?

With the 2015 Audi S3 press event over and done in Austin, I wasn't as constrained by time commitments for the homeward-bound portion of the Texas Road Trip. That meant I could sleep in a little bit and go for a relaxing (albeit hot and muggy) run down by the Colorado River. I was on the road by 9:45 a.m., earlier than Day 1's 1:30 p.m., more civilized than Day 2's 6:30 a.m. wheels-up time.