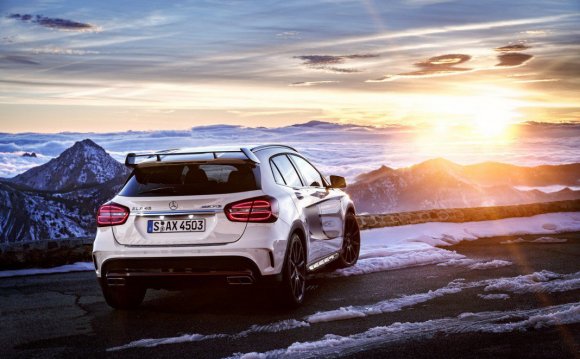 When the BMW X3 and the Mercedes-Benz GLK launched, they were slightly funky utes at what was then the small end of the luxury-SUV spectrum. Each took a moment to find solid footing—the BMW in its second generation and the GLK at its midcycle refresh—and each now come at prices that leave room for smaller, less expensive newcomers. BMW threw its X1 into that breach for 2013, offering up a decidedly wagon-oid experience in a package that looks like a Bavarian Subaru Forester. Mercedes has responded with the GLA250, a turbocharged hatch-on-stilts built on the same bones as the CLA-class.

From the nose, the GLA looks fully Benz modern, featuring a blunt, upright prow, swept-back headlights, and the all-important emblem centered proudly in the two-bar grille. From the rear? It’s just a hatchback, one with massive, protruding taillights that look like symmetrical cybernetic boils. As with the B-class Electric Drive, the chrome bar meant to tie the taillamps together instead appears a bit like aftermarket kit. The rear is where this car’s otherwise handsome exterior terminates with a whimper.

Its numbers aren’t far off those of its sedan sibling—only one-tenth slower to 60, two-tenths slower through the quarter-mile, and three-hundredths of a g less grippy around our 300-foot-diameter circle. The 70-to-0-mph stopping distance of 155 feet warrants autobahn-worthy accolades, but the pedal went soft after four or five stops and our tester noted moderate fade. So it stops well, as long as you don’t ask it to do so too often.