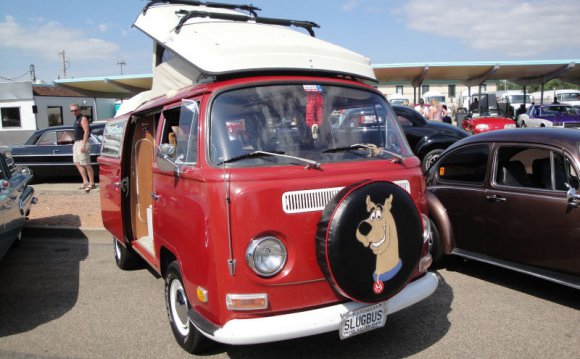 Getting out the map, seeing the country and sleeping where the day takes you is a grand tradition that the automobile is becoming less and less vital to. At some point after the last recession, the American love affair with the car became a relationship built on tolerance between an increasingly grumpy couple. Researchers at the Texas A&M Transportation Institute revealed in their 2012 Urban Mobility Report that the average American commuter wasted $818 in time and gas sitting in traffic in 2011. That's $121 billion total, which is up $1 billion from 2010 but still shy of the $128 billion wasted in pre-recession 2005.

The Department of Transportation notes that U.S. driver, who had been racking up a steadily increasing number of miles since the 1970s, started cutting back in 2008 and never returned to that peak. Meanwhile, traffic information service Inrix notes that as average gas prices started spiking in 2010, average commute times during peak hours dropped from more than four hours to less than two.

A study done by the Frontier Group and the U.S. Public Interest Research Group Education Fund found that the average U.S. driver actually started cutting back well before the recession, peaking around 2004 but dropping 6% by 2011. While the total miles driven in the U.S. rose 3.8% from 1948 to 2004, they've been flat since. Gas prices, disdain for the commute, a 4% drop in vehicle ownership since 2006 and a 4 percentage-point drop in licensed drivers since 1992 are all sucking the joy out of the road trip.

Americans are still vacationing, but they're not doing so with an easy conscience. According to travel site TripAdvisor (TRIP ), 89% of Americans are taking a trip this summer, with 74% of those travelers going by car. But a full 32% say that gas prices are going to have a direct impact on their travel plans, especially with gas prices hovering around $3.70 per gallon.

Still, AAA found that 34.8 million people planned to travel by car on Fourth of July weekend, which was the highest level of holiday traffic since 2007. But most of those trips are more like jaunts than epic summer adventures. Last year, when gas prices were about 30 cents cheaper per gallon, TripAdvisor discovered that only 11% of Americans planned road trips of 500 miles or more.

So what if those drivers upgraded their vehicle? Maybe something a little more comfortable, more fun or more fuel-efficient? Well, with some help from the folks at Edmunds, Kelley Blue Book and TrueCar (TRUE ), we've come up with 10 vehicles that put some of the leisure back in those long leisure trips down lost routes and expansive highways:

This is it: The last stand for the venerable station wagon. In the shadows of summers past, America's Spirit of the Road donned an aloha shirt and sunglasses, hitched up a teardrop trailer and packed the entire family into a wood-paneled wonder car.

Artist Norman Rockwell painted it into the American storybook in paintings including and, while Chevy Chase and his family of Griswolds likely signed the wagon's death warrant with a less-than favorable portrayal in National Lampoon's Vacation.

But the Vista Cruisers and Volvos are gone, leaving the Volkswagen (VLKAY ) Jetta Sportwagen to turn out the lights on an entire era. With roomy seating for five, 33 cubic feet of cargo capacity with the rear seats up and 67 cubic feet of room with the seats flat, this is the family wagon for those who can't bear the thought of a minivan, never bought into SUVs and don't want to spend on Audi or Mercedes wagons. The quiet cabin and smattering of Volkswagen tech throw-ins are a nice touch as well, but it's the turbocharged 2.0-liter diesel engine that gets nearly 42 miles per gallon on the highway that helps a budget-conscious family spend a little more on the vacation itself. Throw in a nearly 13 square foot panoramic sunroof, touchscreen navigation and a rearview camera, and you have the most modern version of the road relic station wagon available.